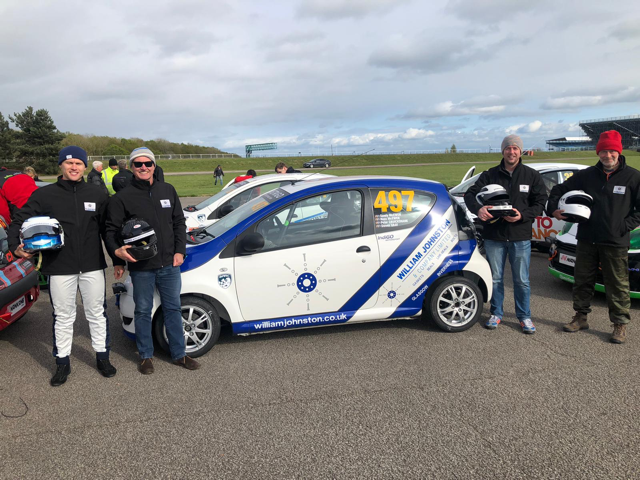 The Silverstone 24 hour race, held at the Northamptonshire Grand Prix track on 27/28 April, made history by having the largest racing grid ever seen in UK motorsport with 100 identical Citroen C1s racing round the clock. Teams of 4-6 drivers sharing each of the race prepared, small saloon cars battled from 5.30 pm on the Saturday through the night and some challenging weather conditions until the same time on Sunday afternoon.

William Johnston & Company Limited, who supply seals, gaskets and joints to a wide range of industries throughout the UK and overseas including the motor sport sector, were delighted to support a team of four Scottish drivers in the event. After a difficult night-time qualifying the team started the race, along with 99 other identical cars, in 36th position but were up to 23rd after two and a half hours before the first driver change.

Unfortunately, as darkness descended and rain fell, the second driver left the track without damaging the car but it had to be recovered from one of the gravel traps which surround the perimeter of the circuit where it was stranded. This incurred a three lap penalty and time was lost leaving the car in 77th position with 21 hours of the race remaining.

As the night progressed the drivers endeavoured to keep a steady pace and out of trouble and got back into the top 50 by daybreak. By noon a top 30 finish looked possible and with just over two hours to go the car was in 23rd position, eventually taking the chequered flag in 19th place. This was a creditable result for the team which had amongst them four Scottish Racing Championship titles and had an age range of 28 – 66 years!